The brioche scarf has been washed, blocked and fringed, and I must say I’m quite happy with the results. I’m still left with some yarn on the magic ball, and I am taking this as an invitation to add in more scraps as they come, and keep the never ending ball rolling.

In other news, I’ve decided not to start any new knitting before I’ve made satisfactory progress on the following three unfinished objects (I’ve been dragging these along for far too long now). This means:
– finishing the two sleeves of my Lopi sweater (I’m hoping that when this tedious part is done, knitting the yoke in stranded colorwork will be a reward in itself, and the whole thing will get finished fast);
– finishing my gansey scarf (can’t believe that thing was started 2 years ago!);
– joining a new ball of yarn on my seed stitch wrap.

We’ll see how that goes.

Well, another year has gone past, and I’m still knitting strong, and having a ball at it. That’s something to celebrate, I guess.
Speaking of balls: on Tuesday night I made myself one of these magic balls, from worsted weight scrap yarn I had lying around. The living room was full of coloured lengths of string, as I cut and arranged and assembled. I didn’t use the Russian join for attaching the scraps together (which was what the tutorial I was following suggested), but tried instead the double knot technique. It worked really fine (I’d say it’s perfect for this kind of project, but would probably not recommend it for less “scrappy” endeavours). I ended up with a nice big ball of yarn, from which I’ve started knitting a simple brioche scarf for my cousin’s young daughter. 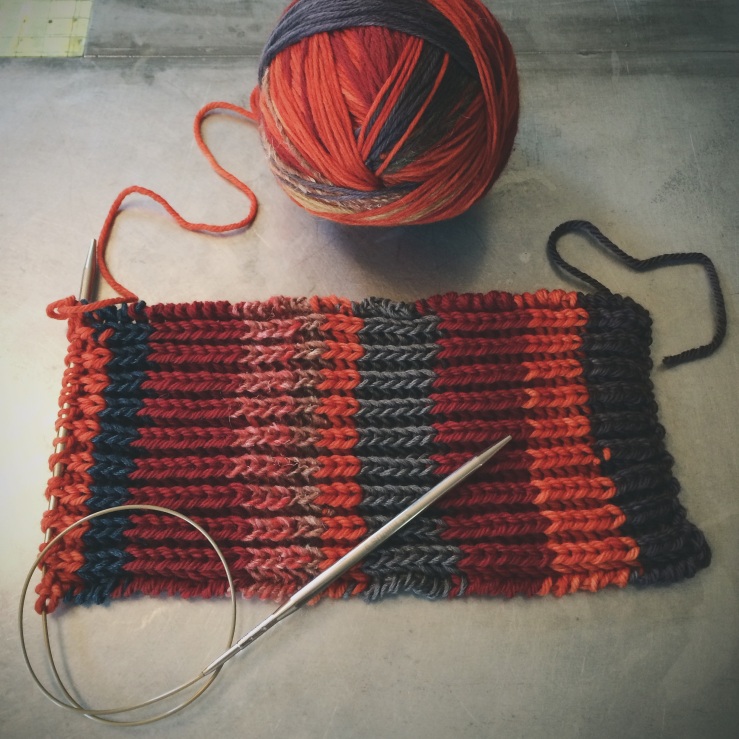 Now, let me tell you a few things about brioche stitch I wish I’d known way earlier (you’re probably aware of this, but me? fresh experience!):
– although it looks deceivingly like plain 1×1 ribbing, brioche stitch is something entirely else, both structurally and texturally;
– although there are whole sites and books devoted to that sole stitch and its many variations (including the mesmerizing two-colour version), there is nothing overwhelming about brioche. On the contrary, it’s real easy to knit (I’ll say that again: it’s easy). I don’t know why I was so hesitant to give it a try (if you’re in the same case, you might find this tutorial helpful);
– brioche stitch is fast (and I’d even wager that it’s faster than 1×1 ribbing), because, you see, all you’re really doing is slipping and knitting stitches (no purling).

In other news, I spent the holidays with my family in Mauritius, and tried to find some yarn-related stuff. Alas! Though the island has a thriving knitwear industry, it seems to devote no special place to handknitting. I couldn’t find any yarn store, nor any yarn, apart from the usual acrylic and nylon(!) balls on sale in supermarkets.
I did nonetheless buy myself a beautiful, warm men’s woven wool shawl. It was made in India, and is called a lohi (I’m guessing from the name of a sheep breed). I just love it!

And, on a final note: I regularly post my yarn-related findings on Flipboard. Do have a look.